I finished tonight the first small batch of line infantry including 2 bases with 8 figures in total. 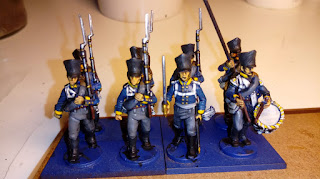 Still to be done

To speedup the paint I tested a fast paint system in which I used a blue primer for the figures and black primer for the knapsack and heads. It seems to have worked fine. I initially did not glue the head and knapsack but for the next group i will immediately glue the heads.. there is no advantage to glue them later and in this case there is also the risk of damaging the paint job.

The primer is Liquitex prussian blue spray... excellent ! Then i did a quick dry brush with medium blue. I painted the trousers with london grey and the coat german fieldgrey or other grey. the gaiters and the shako are painted black grey. Then i did a general wash with nuln oil and reikland flesh on the  faces. After the wash I did a quick passage with the original colors and completed. It took me one and half evening... a bit too long. I hope to speedup in the next batches (the next will be of 16 to complete the battalion). 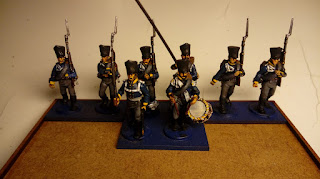 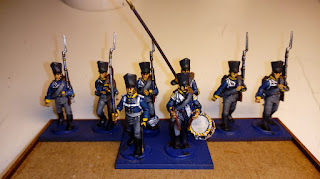 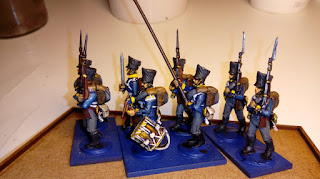 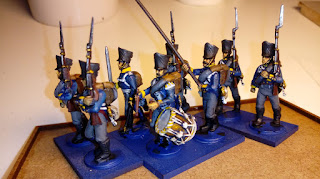 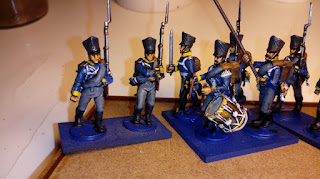 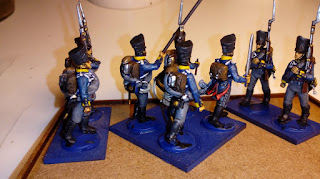 To assemble my forces I selected two excellent 28mm miniature producers which I knew very well.

I was already familiar with their products and their excellent service. In addition, both companies are active supporters of the Waterloo replayed initiative and offered generous discounts on their products for the participants so it was a win-win option. 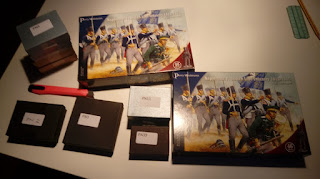 The first batch arrived is that of Perry brothers. As you see from the picture I bought are:

In total I must produce

As always it took less than a week to have the Perry jewels on my working bench. Indeed the metal figures came with beautiful small cardboard packs that make them really luxury products ... And when you open the box the first impression is confirmed. Excellent castings, limited mould lines and varied poses make these items a perfect choice.   I was tempted to go with them for the landwher also but the total cost would be too large (I need 6 battalions of lw so about 150 miniatures) and Perry discount only the plastic.

Even though the day after I had to leave for a work trip in the USA I could not resist to start assembling some musketeers ... In the next post I will report the work on the first battalion.
Posted by Garga's Little Wars No comments: Links to this post
Email ThisBlogThis!Share to TwitterShare to FacebookShare to Pinterest
Labels: 28mm, Napoleonic, Prussian, Waterloo Replayed

Let me now explain a little better my task. I am supposed to recruit a "brigade" of 10 units to be used with Black Powder 2nd ed rules. Here is the breakdown I got from Jack (the Ministry of War)

After a while and a couple of emails with Jack I realized that actually the brigade has been split across three players. Each of us will have the 3 Line and 6 landwehr battalions, then I will have an artillery battery of 4 guns while the other two will have a squadron of Landwehr cavalry each...
This means that the whole brigade would field

which makes approximately a scale 1:10 since the brigade fielded at the start of the campaign about 6500 men.

In practice i will command a regiment not a brigade but wisely the organizers created balanced forces so that i can have in my unit both line and landwehr ...

I immediately went to my favorite Waterloo source

where you can find beautiful tables for each regiment present in the hundred days campaign
to see the look of my regiments.

The 10th is a standard prussian line infantry regiment with 2 musqueteers and one fusiliers battalions. It has yellow facings and a nice red/orange flag...

see here the uniforms of the 10th

The Neumark Landwehr has red piping and facings and the Silesian has yellow ones. So a very good mix. It took me a while to understand all what i need (I initially thought about doing two neumark regiments because several order of battle I consulted assigned to this brigade 2nd and 3rd Neumark Regiments) and in the end was very happy to have more variation.

see here the uniforms of the 2nd Neumark Landwehr

Finally i had the 21st foot battery with six 6 pdr and 2 7 inch howitzers.

The whole brigade was under command of General Albrecht Georg Ernst Karl von Hake
but actually mine is commanded by major von Braunschweig commander of 2nd Neumark Landwehr. Find here some notes on his life (in German).

After a long time in which I only posted on facebook I reopen my blog. The reason is that I have been accepted as member of a glorious project and I want to document my steps towards the completion of my tasks ...

In case you are curious the project is nothing less than Waterloo replayed
the largest ever wargame battle with more than 100 players and 22000 miniatures.

I got the info about this project from the newsletter of Perry bros this summer during my holidays ... I immediately wrote to enlist but ...

I was not discouraged so I wrote again asking to lbe put in a waiting list in case someone would drop..

Land Monday I scanned my hobby email (gargaslittlewars@gmail.com) and I realized that some 10 days earlier I received an email  from one of the organizers Donald Adamson writing me the probably there were some possibility.... 10 days !!!!

I did not even noticed that he called me Danielle (perhaps they were thinking of enlisting a cute girl) ... I immediately wrote Donald saying I accept (took some risk since I did not even consulted my chief of staff :-)

After some very long hours in which I tried to work (not so succesfully) I got an answer from Donald ...

I was in ! I was enrolled as one of the three commanders of the 13th Prussian Brigade (Prussian ? ... ok in the end still a blue jacket !)

This blog is member of

Garga's Little Wars
Bologna, Italy
This is the blog where I report my activity and all interesting things referred to my great passion: miniatures painting and wargaming. I am fond of both historical and fantasy wargaming. I play (or played) Flames of Was, FIelds of Glory and Warhammer. I also have a lot of Warhammer 4000 and Lord of the Rings miniatures but I am not an active player of them.